Luxury homes in the Denver Foothills and Evergreen, CO

The Chart shows us that the luxury market only has peaks and valleys of the seasonal fluctuation of the market. Everything else is pretty steady and consistent. The peaks are pretty much the same for days on market. This is a 5 year representation of the $1,000,000 plus market in Evergreen, Conifer, Bailey and Morrison. The number of listings in the luxury market have not changed much either. It is basically the fact that people that have made it to the point of affording a luxury home will most likely keep that ability in good times as well as bad. 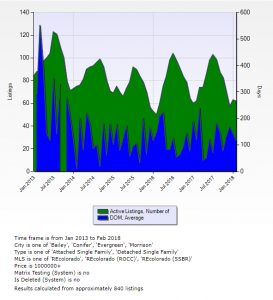 If buyers are holding out for luxury listings to go up or down with the market they might be disappointed. The only thing that seems to change with times in the luxury market is that you get less for your money as time goes by. What one million dollars could by you just 5 years ago was much more. For example a home that you could have bought for just $700,000 five years ago is much closer to a million dollars now. We will most likely see this trend continue over the next few years as well. Luxury homes also tend to hold their value better. They don’t necessarily appreciate at the rate of $500,000 homes in the Evergreen area but they don’t have the drastic drop as we saw in 2008 and other recession times. They are a much more secure and steady investment. You might not want to try to flip a $2,000,000 home but if you can hold it for a few years you will most likely see an increase in you investment.  It is more like investing in Microsoft instead of a penny start up stock.

About the Author: Danny Skelly Realtor

My name is Danny and I am a the employing broker and owner at Orson Hill Realty in Evergreen and Conifer Colorado. I am a Realtor that specializes​ in high end luxury homes, mountain homes, horse properties and farms and ranch. I also work in the luxury real estate market as well. Call for any of your Evergreen or Denver real estate needs. Orson Hill Realty Denver Foothills - Danny Skelly 30792 Southview Drive #110 A Evergreen, CO 80439 Evergreen | Golden | Lakewood | Denver | Conifer | Morrison | Denver Foothills 303-503-8793 303-835-9895