What’s up with the inventory?

So as a real estate broker in Evergreen, CO (one of the coolest towns in the Denver Foothills) I (like most Evergreen Realtors) work the entire foothills. So I have my pulse on all the activity. Also being a numbers guy I follow it all pretty close. As they say “numbers don’t lie!”.

As most real estate agents (brokers) in the area I am really hoping that our inventory picks up. There is every indication that it will. We always see an uptick in inventory when the snow melts. Although this year is a little different as far as I can tell from talking to clients and other real estate brokers in the area. The general feeling is that people are not making the lateral move right now. Meaning people are not moving from the area to the area because they are afraid that they won’t find a new place to live. Meaning people are not up sizing and downsizing in the same area. That is unfortunate because that does account for a good deal of market movement in in a small popular market like Evergreen, Conifer, Bailey, Morrison and Golden.

Show me the numbers Mr. Realtor!

Since I previously mentioned I am a numbers guy. I also am more of a visual learner so I will provide some graphs to explain what is going on here. The first graph shows all active real estate listings in the Denver Foothills over the last 12 months. As you can see even in the last 12 months we have certainly lost a good deal of inventory. This chart is not as telling as the next one since we have already discussed that we are a seasonal real estate market. That is the reason for this graph.

The next graph is kind of the real story here. Please keep in mind these numbers are based on homes in Evergreen, Conifer and Bailey. If you notice this is supply and demand working. Although the seller’s market has calmed just a bit it is still in their favor. We had nearly 1000 homes on the market at the peak almost 5 years ago. Since then (again that was during the summer of that year, or busiest time of the year). At this point we are at just over 200. If you look at the blue line, the average price, you will see a nice steady up trend. I feel this is going to motivate people to cash out and sell pretty soon. People have gained a lot of equity in their homes over the last few years. 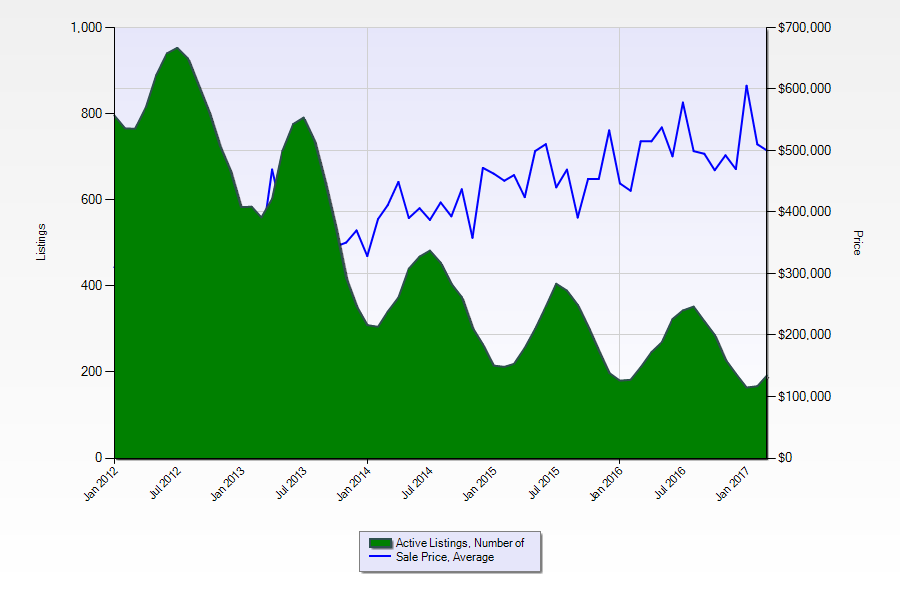 To sum it up I think that in the recent months the market has calmed just a bit. You can tell by the fact that just a few months ago sellers were getting multiple offers over asking price. That isn’t the case anymore unless the home is under 400K. Any price point above that is taking a bit longer to sell and isn’t showing the high demand it was just 6 months ago.